On June 24, 2021, New Hampshire lawmakers passed the state budget, HB 2. Sections 37-40 of the budget enact the Fetal Life Protection Act, or FLPA—New Hampshire’s first ban on late-term abortion. The FLPA has been signed into law and will go into effect on January 1, 2022.

At a time when other states are legalizing abortion up to birth, the Granite State has boldly gone in the opposite direction and rejected its longstanding commitment to pro-abortion absolutism. In fact, New Hampshire has just become the first state in the country to go from allowing abortion up to birth to passing a late-term abortion ban.

Below are some common questions about the Fetal Life Protection Act and our responses.

Q: What does the Act do?

The Act prohibits abortion at or after 24 weeks of gestation, with exceptions for the mother’s life or physical health.

Outside of those two scenarios, there are no situations where an abortion provider will face penalties of any kind.

Q: Does the Act include an ultrasound requirement?

Yes. New Hampshire Public Radio has reported that performing ultrasounds before abortions is already the normal practice in New Hampshire. The Lovering Health Center in Greenland, for instance, says that ultrasounds are necessary to make sure that patients “are in a safe place to have an abortion.”

According to NHPR, New Hampshire is about to become the 28th state in the nation to have an ultrasound requirement.

New Hampshire, however, will have one of the most modest ultrasound requirements in the entire country. Under the Act, performing an abortion without an ultrasound will only be punished in one situation: where there is a “substantial risk” that the child is at least 24 weeks old. In any other circumstance, the provider can skip the ultrasound and face no penalties under the Act.

Q: Does the Act require a “transvaginal ultrasound”?

No. That claim appears to have been simply invented in bad faith.

Q: Will the Act’s ultrasound requirement be costly?

No. As discussed above, it will only be a crime to perform an abortion without an ultrasound where there is a “substantial risk” that the child is at least 24 weeks old. Early in pregnancy, abortion providers can skip the ultrasound and face no legal penalties of any kind.

Abortion advocates themselves claim that late-term abortions are rare in New Hampshire. This means that the ultrasound requirement in the Act will have a minimal impact.

Q: Why does the Act require ultrasounds?

The ultrasound requirement’s sole purpose is to make a clear determination of the child’s gestational age in borderline cases. Unlike in many other states, the Act does not require that the woman view the ultrasound or be given an opportunity to view it.

The Act uses a specific gestational age to prohibit abortion: 24 weeks. That means that, if a child is somewhere around 24 weeks, we need to ensure that there is a precise determination of the child’s age.

If the ultrasound shows the child is under 24 weeks, the abortion can proceed. If the child is at or over 24 weeks, that child will be protected by New Hampshire law. Making this kind of determination is necessary in order to have a clear, workable, and modest legal rule.

Q: Do other states have 24-week abortion bans?

States have a wide spectrum of laws on abortion, ranging from very restrictive to unlimited. Until very recently, banning abortion at 24 weeks was considered to be a moderate, middle-of-the-road solution. 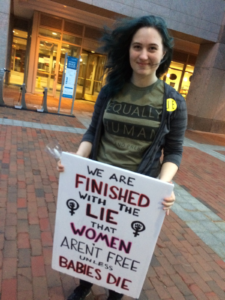 Just a few years ago, Massachusetts, New York, and Nevada all had meaningful bans on abortion starting at 24 weeks. Over the last few years, however, pro-abortion extremists in these Democratic states have successfully removed all limitations on abortion. Today, abortion is effectively legal in all three states for any reason up to birth.

Massachusetts’ abortion ban was the last to be repealed. Until the passage of the “ROE Act” in December of 2020—only six months ago—Massachusetts imposed felony penalties on abortions at or after 24 weeks. The Act will essentially take New Hampshire back to where Massachusetts was late last year.

Q: Does the Act contain an exception for fetal anomalies?

No. Before December of 2020, Massachusetts’ 24-week ban also had no exception for fetal anomalies. Any alarmist rhetoric about the Act should be viewed in light of that fact.

In 2020, Massachusetts was commonly ranked as having the best medical care in the country. If the lack of a fetal anomaly exception in the Act is “extreme,” or if it will cause doctors to flee from New Hampshire, then this should also have been true of Massachusetts last year.

Q: Does the Act contain a rape exception?

The rape exception in this bill is that it is a 24-week ban. By 24 weeks, any woman has known she is pregnant for months.

Yes. Both Massachusetts and Nevada had felony penalties for 24-week abortions until recently. Additionally, felony penalties are necessary to make the Act consistent with current New Hampshire law.

New Hampshire already has felony penalties in our so-called “partial-birth abortion ban.” Yet this arbitrary law only prohibits one late-term abortion procedure. A fetus can easily be aborted using other procedures at the same gestational age.

Imposing felony penalties for all abortions performed at or after 24 weeks will make New Hampshire law sensible and consistent.

Q: Will the Act punish abortion providers who are “just doing their jobs”?

In legal parlance, the Act punishes only knowing or “reckless” conduct. It does not punish the good faith errors of doctors or other abortion providers who are, as they say, “simply trying to do their jobs.”

Q: I tried reading the Act and it was very complicated. Why can’t it be simpler for non-lawyers to understand?

Abortion bans used to be much simpler to read. And in some states where very old abortion bans remain on the books, they still are. While New Hampshire’s ban is similar in effect to some old abortion bans, its structure is more sophisticated.

There is a good reason for this. Over the past decades, pro-abortion lawyers and judges have devised constitutional arguments against almost any imaginable abortion ban. As a result, abortion law has become extremely complex and precarious. Legislators must carefully navigate a minefield of possible legal arguments to avoid having their bans overturned in court.

The intricate structure of the Fetal Life Protection Act is necessary to strike a finely-tuned constitutional balance: to detect and prohibit late-term abortion without placing any burden on a woman’s ability to obtain an abortion earlier in pregnancy.

Oddly, some journalists have pointed to parts of the Act that they find confusing and suggested that they could be errors. They are not. The bill has been carefully reviewed by legal scholars and litigators in New Hampshire and around the country.

Q: Is there any other reason the ban is considered “extreme”?

No. The fact is that Democratic New Hampshire legislators have overwhelmingly rejected almost every kind of late-term abortion ban you can imagine. Democrats do not oppose this ban because of the ultrasound requirement or for any other specific reason. They oppose it because it places some limitation on abortion prior to birth.

In 2018, for instance, HB 1680 sought to ban late-term abortion without imposing any criminal penalties or any ultrasound requirement. The ban also contained every kind of exception. Still, only four Democrats in the entire House voted in favor of that bill.

Thankfully, our legislators finally brought decades of ugly pro-abortion extremism to an end.

As we enter the 2022 legislative session, pro-abortion extremists—including multiple Republicans—are introducing bills intended to repeal the Fetal Life Protection Act or to gut the law and render it unenforceable. One of these bills, HB 622, was underhandedly created by the GOP-led House Judiciary Committee itself in an executive session—meaning that it is already heading to the House floor. Two similar forthcoming bills, LSR 2099 and LSR 2031, are awaiting bill numbers and committee hearings.

Another forthcoming bill, LSR 2704, entitled “relative to reproductive rights,” is probably intended to repeal or gut the FLPA, although the specific content of the bill is not known to us at this time.

Please contact your representatives and urge them to stand firmly by the FLPA and to do everything they can to oppose these bills. The FLPA is New Hampshire’s only protection for children in the last months of pregnancy; if it is repealed or gutted, these children will once again be left with no legal protections.